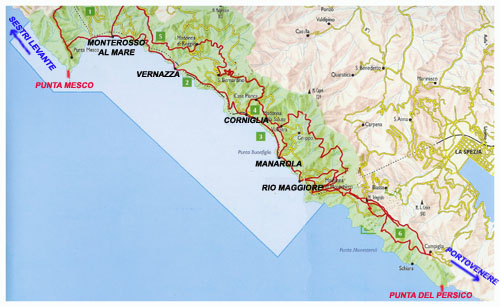 
Sestri Levante is halfway between Portofino and the "Five Lands". It is convenient starting place for short boat trip and excursions which take you towards these places that show you the beauty of the Riviera of Levante The Marina hotel of Sestri Levante is situated five minutes walking distance from the railway station . The train and boat are the best way to visit the "Five Lands". You can get to Monterosso in less than 25 minutes.

In past times the area was covered by thick wood lands but over the years it has changed by using a particular terrace system of cultivation and dried stoned walls. It is interesting to see that all the hard work done by these men has contributed to create this fantastic place still visible in the stations of Vernazza and Rio Maggiore.

The area has a wonderful climate but is mainly known for its famous wines which bear its name. Famous since ancient times and mentioned by Boccaccio, Petrarca, Carducci and Pascoli. The wines of the "Five Lands" are made from the vineyards of Albasola, Rossese, Vermentino and Tubbiano cultivated in very low wine-trellis to protect them from the sea wind. There are two types: the dry one of Corniglia and a liqueur wine known as Sciacchetrà, which is the best ligurian wine. It is left to ferment until spring in the barrels and only put on sale after two or three years after the wine harvest . The olive oil is very famous too and the cultivation of lemon, which makes and excellent liqueur "Limoncello" and a special marmalade. The park has started to grow Lavender Bushes and the production of some perfumes. Excellent tomatoes, peppers, rocket salad and basil which makes an excellent "Pesto". An very rich vegetation of the "Five Lands" also produces various types of honey. We would also like to mention anchovies fished and preserved, especially in Monterosso, which are still considered the traditional dish of the "Five Lands". But this beautiful area is most famous for its winding paths along beautiful and breathtaking views the most visited is "The sentiero Azzurro" , which in only four hours connects the five characteristic villages of the "Five Lands". The last part, between Manarola Rio Maggiore, is the famous "sentiero dell'amore".(Path of lovers) , which offers half an hour of breathtaking sea views. It is also of great interest the "Sentieri dei Santuari", which offers a wonderful spiritual trip.