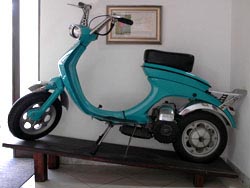 The first prototype, was built in 1967 by Innocenti's designers. It was trustly figured out definitive technical solutions, but from aesthetic point of view was classified as 'dead stock'. Indeed, Bertone was called to restyling the Lambretta appeareance and prototype "Luna Range" was born ready to be produced. Presentation to the public occurred in May 1968, the 28th with the name "Lambretta 50 Lui". Two versions were available with 50 cm3 of engine size: "C" and "CL" model. The latter had differences in handlebars and headlight respect to the first model. They cost repectively 89.500 and 95.000 Lire. At the end of 1968 another more powerful version with engine size of 75 cm3: "S" (115.000 Lire) and "SL" (125.000 Lire). The latter included an automatic oil mixer for the first time into a scooter sold in Italy.
The "Lui" provoked a feeble economical return: to Bertone wasn't imposed industrial criteria to respect, then, only few already existing production components could be reused upon the new model. Despite the great advertising campaign, sales were poor (37.614 samples, about 75 percent with 50 engine size) and then "Lui" dissapeared from the market in 1969.